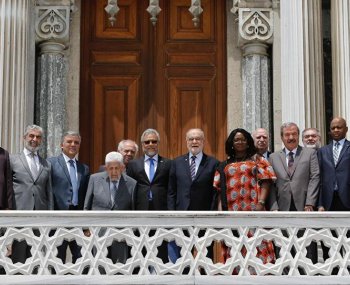 Turkey pioneered the establishment of D-8 on 15 June 1997. Turkey did this with the belief that “A New World” where peace, prosperity, and happiness reign can only be established with the contributions of developed and developing countries.

We regard the establishment of D-8 as a guiding light towards a new world based on the six principles symbolized in the organization’s flag after so many years of human suffering.

The six principles mentioned below will bring a new spirit and excitement in efforts towards overcoming problems and establishing a new world. The current world order established by the triumphant countries after the Second World War in February 1945 has failed to bring peace to humanity. We need a new common ground, and a new beginning. D-8 is the main actor of this common ground. D-8 must be regarded as the representative of the developing countries. Establishing a fair international system by solving the problems based on the principles of peace, dialogue, justice, equality, cooperation, human rights, and democracy will only be possible through such a sincere approach.